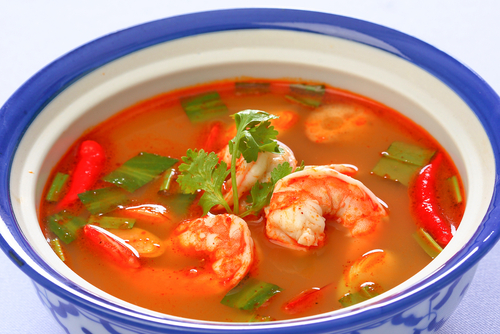 A Recipe for Tom Yam Goong

Tom Yam (or Tom Yum) Goong is a hot and sour prawn soup that is considered by many to be Thailand’s most iconic dish. The Thai word “tom” refers to the boiling process, as in the making of a broth, while “yam” refers to a spicy and sour salad. Thus, tom yam is a soup characterised by its distinctive hot and sour flavour, which is derived from the generous amount of fresh herbs and spices that are used in its preparation.

Ingredients for Tom Yam traditionally include the likes of lemongrass, kaffir lime leaves, galangal, lime juice, fish sauce and red chilli peppers. The soup also contains a protein source, which can be chicken or pork. However, it is more usually made with “goong” (or gung), which translates to English as prawn or shrimp.

A few tips from Thailand

Here’s a (fairly) authentic recipe for the classic Thai soup: Step 1 – Devein the prawns, keeping the head and shell intact, or remove, if preferred.

Step 2 – If you remove the heads and shells, you can make your own prawn stock by boiling them in water for about 5 minutes. Otherwise, add the stock or water to a large pan and gently simmer.

Step 3 – Add lemongrass, galangal, two-thirds of the kaffir lime leaves, shallots and salt into your stock or water. Bring to the boil, then leave for a minute or so before adding the mushrooms, garlic, tomatoes and sugar.

Step 4 – Bring to the boil and simmer for about 20 minutes so as infuse the herb mix into the stock. Then, add the prawns.

Step 5 – Just as the prawns turn pink, add the rest of the fresh Kaffir lime leaves and turn off the heat.

“Tom Yum Goong” is the title of a Thai action film, made in 2005, starring Tony Jaa. The film is a showcase for Khun (Mr) Jaa’s martial art skills, much in the way that “Enter the Dragon” was for Bruce Lee. While any mortal would obviously struggle to emulate the late great enigmatic Lee, Tony doesn’t do a bad job. The film was distributed as the ‘Warrior King’ in the UK, and as ‘The Protector’ in the USA. Tom Yum Goong 2 was made in 2013 by the same team.