NFL Week One Kicks Off In The AFC

The 2020 NFL season is finally upon us and it kicks off with an interesting Thursday night game as the defending champs Kansas City entertaining the Houston Texans, who blew a 24-point lead against them in the playoffs last year. In typical Texans fashion, they have traded away some of their starters so it’s hard to see them getting anything out of this one and we doubt they will get anywhere near 24 points.

The weekend does serve up a few other mouthwatering encounters with Tampa Bay complete with TB12 (Tom Brady for those who are casual NFL Fans) starting his new life without Bellicheck. It’s not the opening game he would have wished for but it should be fun seeing him up against Brees. We cant see him having a winning start but best get the toughest game on the schedule done with early. 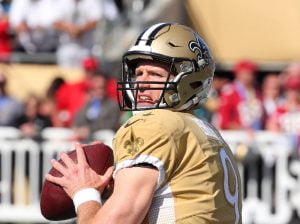 Last seasons NFC Championship runners up Green Bay open with a tough trip to Minnesota, who should be their biggest rivals for the NFC North crown (despite jettisoning most of their starting secondary). Look for Rodgers to have a big night here as he tries to get that chip off his shoulder caused by the Packers back office drafting a QB in round one and adding no meaningful offensive weapons for him.

Finally, we are looking forward to watching the Rams take on the Cowboys. The Rams had a classic Superbowl hangover last year but talk of their demise seems premature to us since they still sport players of the calibre of Aaron Donald and although Jared Goff took a step back last year he like Aarron Rodgers above has something to prove this year so who knows. This is our upset game of the week.

Anyway here is the week’s fixtures  with our tip in bold: