NFL Week 9 – Brees Wins The Battle Of The QBs

Whether the Steelers can remain the only unbeaten team in 2020 and the meeting of two of the best QBs to throw a ball in the modern era as Brees & Brady faced off in Tampa v New Orleans round two. Neither worked out quite as expected, however, the Steelers are still undefeated.

Ok, let’s have a quick rundown of the weekend’s results starting with…

Sadly (for anyone who is not a Saint’s fan) what looked like the game of the weekend ended up a bit of a one-sided damp squib, which was over by half time. Still for us UK fans it was good as we could just go to bed (well it was getting into the early hours of a Monday morning!).

Tom Brady looked well out of sorts being frequently under pressure against a fierce Saints Pass rush (he took 3 sacks) and throwing 3 picks didn’t help. However, the main issue on offense was their inability to get any sort of running game going. Eight yes Eight yards was all they managed as the saints dominated both sides of the ball. New Orleans are 3-0 in the division now and with two of those wins coming over the Buccs they are strong favourites to clinch the NFC South and a home game to start the playoffs. Tampa are still likely to make the postseason (especially if the NFL moves to a 16 team bracket) but will have to address that anaemic running game and keep Brady on his feet if they are to have a deep run. 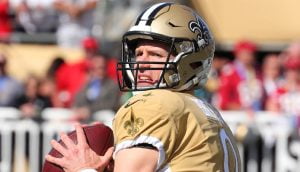 Brees had 4 TDS and no interceptions in the Saints beat down of the Buccs. Image: Steve Jacobson/Shutterstock.com

With Dallas playing their 4th String QB (who had zero starts) this was pretty much everyone’s banker this weekend, however, with Dallas leading 19-9 at the end of the third quarter an upset looked on the cards. Still Big ben has been here before (in fact quite a few times this season) and his cool head coupled with some poor clock management and late-game decision making allowed Pittsburgh to ease to 8-0. Surprisingly at 2-7, the Cowboys are still alive in the dismal NFC East, however, with trips to the Vikings & Ravens coming up, this stay of execution might not last long.

Best Of The Rest

Which other games stood out?

Our performance of the weekend goes to the Bills, who achieved what they had been lacking, a marquee win over a genuine Super Bowl contender and as a bonus we can add the fact that Josh Allen deserves to be in the conversation for MVP, thanks to his quite stunning performance. 415 yards passing 3 TDs 81.6% completion rate and a 138.5 rating, despite being sacked 7 times! The Bills are now strong favourites for the AFC East and on this showing will be a threat in the postseason.

Seattle has now lost 2 of their last three games, and face a tough task next when travelling to the Rams. Still, their fans shouldn’t worry too much as they contributed to a very entertaining game and they did turn the ball over 4 times. They also have games against the Giants, Jets and Washington slated so they should get enough wins to at least make the Wild cards this year.

The Packers were never in any danger in this one, which was not a huge surprise given the ranks of the 49ers were so depleted that we are sure some fans would have been saying who is that playing in x position! To be fair the Packers had a few injuries too but nothing by comparison. Still, all they could do was win and the win was a lot more comprehensive than the score suggests as the 49ers scored two garbage time TD’s after the Packers took their starters out. Green Bay now move clear at the top of the NFC North and will be pleased to get this one out of the way as the result wouldn’t have been so clear cut against a full-strength San Fransisco. The 49ers are still alive in the NFC West but need to get their starters back asap to avoid the fabled Super Bowl runners up hangover.

The Chiefs had a much harder time than expected in this one but hung on thanks to a missed field goal in the dying seconds.  To be fair Joey Slye was kicking from 67 yards away but the Panthers should never have been given this hail mary shot. The Chiefs are now 8-1 and looking like the team to beat in the AFC. Carolina are now on a 4 game losing streak but did look much better balanced offensively now that Christian McCaffrey is back. We doubt it will save their season though.

This was a bit of a defensive slugfest won by the Ravens thanks in no small part to a couple of bad interceptions which they turned into 14 points. They also got a lot of help from their defense & special teams. The Colts piled up the yards offensively but couldn’t turn them into points twice turning the ball over on downs. We wouldn’t be sure of the same result should these two meet again in January.

This was never as close as the final score suggests as the Titans were 24-3 up heading into garbage time however the game did turn on a fumble return for 6 in the third quarter. Nick Foles played pretty well in this one but can’t carry the Bears on his own. They have now lost 3 on the bounce and are in danger of losing touch with the Packers atop the NFC North. The Titans were efficient and took their chances. No one will fancy meeting them in the postseason if as it looks likely they make it.

Quick Takeaways from the Other Games

So how did the playoff fringe and also-rans get on?

Both teams started the season with moderate expectations (or practically none in Miami’s case) but here we are nearing the halfway point and both are in the Wild Card race. This was a fun game to watch with two bright young QBs showing what they can do, and just enough drama to keep you enthralled right to the end. The Falcon’s were a tad unlucky missing a late field goal and giving up a bad fumble for a TD, but hey credit the Dolphins for taking advantage. Tua looks the real deal for them, now lets hope he can stay healthy.

That’s 2 wins in a row for the Falcons now, who are slowly learning how to stop blowing leads, although they did have a good go. They led 27-6 going into the fourth quarter before letting the Broncos back into it. One bright spot for Denver was the QB play of Drew Lock. Is he the long term answer under centre? Well if he can keep this up he has a chance.

Dalvin Cook should be in the conversation for MVP he tacked another 206 yards rushing on to his total and he is averaging just under 123 per game, despite a slow start with niggling injuries. Add to that 12 TDs and he is the key to the Vikings offense. The Loins were poor again and it must only be a matter of time before they fire head coach Matt Patricia. They entertain Washington next week and a loss in that one should do it.

Yah a win for the NFC East, which now has 9 wins total – one more than the Steelers! Anyway, Daniel Jones now has 4 wins as a starter – 3 against Washington so they will be hoping that the Giants move on from him next year. One bright spot for Washington is that Alex Smith threw 3 interceptions and they only lost by a field goal. In the crazy bad division, both are still technically alive in the title race.

This battle of the 1-6 teams in the NFC South was surprisingly entertaining. The Jags have now lost 7 in a row, however, Jake Luton played quite well at QB in his first start and almost forced OT with a final 2 point conversion try. Houston has had a pretty rough schedule to date (Chiefs, Steelers, Ravens, Titans & Packers) but things are easier going forward. So even at 2-6 they still have a chance of a wild card as they play the Colts twice in coming weeks.

Wow, the Chargers must be the unluckiest team in football. When they are not blowing double-digit leads they end up losing to a slightly controversial last-second refereeing decision. Sooner or later they will get the bounce of the ball but their hope of the playoffs are pretty much over. Still, Justin Herbert looks like the real deal. The Raiders are on the up and Gruden seems to be building a solid team. OK, they pinched this one but looking at their schedule we can see them making double-digit wins.

A last-second field goal was enough to send the Jets to 0-9 for the first time in their history and leave them well placed to move on from Sam Darnold with the No One pick in the 2021 draft. They were out of playoff contention last week and now its a case of play for pride or tank for Lawrence. Sad times at the Meadowlands with the Giants also struggling. New England can thank Joe  Flacco for their win which is a shame as he played quite well up until that hair-brained decision to throw the deep ball into coverage instead of managing the clock when you are leading well into the final quarter.  Cam Newton was better on the ground than through the air rushing for 2 TD’s and showed some nice composure to get the Patriots into field goal range for the winning kick.

We would never write any team managed by Bill Belichick off but even with this win, it’s hard to see New England sneaking into the postseason. They have the Ravens next and that’s now a pretty much must win.

The following were on a bye week.