The following players have resigned with their current teams early in the NFL 2021 free agent market. This year is set tom be quite frantic thanks to the cutting of the salary cap due to the Corona Virus pandemic.

The list is headed by the Dallas Cowboys, who have handed out an eye-watering $160m deal to QB Dak Prescott. He is a solid starter and a worthy franchise quarterback, however, it’s a fair old chunk of the cap gone and it will take some clever drafting to put enough pieces around him to make a Super Bowl run. 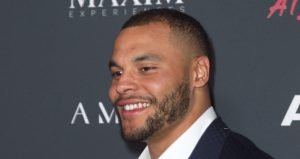 Tampa Are Keeping The Band Together

Speaking of Super Bowl run, Tampa has made their intentions clear by bringing back virtually all their free agents. Barret, David & Gronk are all returning and with Chris Godwin franchise-tagged they are going to be amongst the favourites to the title again. No team has won the Super Bowl back to back since the Patriots did it in 2003 & 2004 with Tom Brady at QB. It’s almost incredulous to think he might be the next, 19 years later!

Cam Newton has been given another chance thanks to his 1-year deal, however, this time he will have a better supporting cast. It looks like Bill Belichick is determined to prove he can do it without TB12 and he has certainly splashed out. Newton’s $5 m deal is chicken feed compared to the other Patriots day one additions, and their spending spree might not be over. The AFC East looks like being pretty competitive this year!

The Packers have decided to retain the services of 2017 5th round draft pick Aaron Jones. This puts him salary-wise anyway into an elite group earning in excess of $10m per annum. This is probably deserved as hi was amongst the most productive running backs in 2020 despite sharing the workload with Jamaal Williams. The cost of this was the loss of star Centre Corey Linsley so we are not too sure how happy Aaron Rodgers will be.

Anyway, the main transactions are below together with how we grade them.

So The Buccs did great, the Packers will be moving the ball on the ground & the Bills & Rams defenses will still be good.  The QB situation in New Orleans & New England looks far from set though so both could be drafting one.