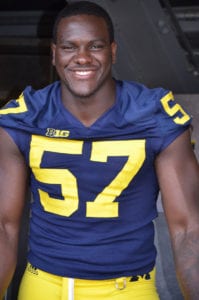 It’s a strange old game American Football sometimes. Here a team who narrowly missed out on a Super Bowl berth decides to trade off one of its best defenders for a second round pick, only to give that up as well as this year’s first-round pick effectively for a replacement. This being a player who although terrific in his own right, had less productivity and is playing on a franchise tag – meaning he is a rental if they can’t cut a long term deal. So what gives?

Seattle who is chronically short of draft picks (only 4!) were always looking to trade their best Edge Rusher once it became clear that they either couldn’t or wouldn’t agree on a long term deal, and using the Franchise tag was a wise move to stop him walking in free agency. So kudos to them for addressing two problems in one, however, they will still need to replace him so that’s probably the first round draft pick used. Will they find someone of his calibre at 29? probably not, but they could package them up and jump into the early teens, or trade down with some team who fancies grabbing a QB with a 5th-year option. Both possible, however, the more likely scenario is that they use pick 21 to find his replacement and add a WR at 29 or turn it into multiple later rounders. Whatever they do they have come out of this ahead on paper anyway.

Well after slashing and burning their defense (which to be fair was not great in 2018) they now have a shiny new piece to add to their DL all be it likely to be expensive. The trade is ok on the face of it but effectively they have given up Dee Ford who had 13 sacks 55 tackles and 27 QB hits, and a 1st round draft pick for a player who had the same number of sacks but only 41 tackles and 27 QB hits. Again they may have cleared a bit of salary cap space, but they can kiss that goodbye if they plan on keeping Clark. Overall this was not an awful move by the Chiefs given Frank Clark is 2 years younger, and may be a better fit for the revamped defense Andy Reid has planned for 2019. Also, it would be a gamble sitting at 29 waiting to see which if any of the top edge rushers fell to them. So there is some method in the madness, however, to us, it looks like they lost out on the deal and the only sweetener is the swap of third-round picks – however, We cant seen moving up a few spots mid draft as being a big thing.

Only time will tell but right now its likely the Seattle fans who are happier with this move.