Persephone is the daughter of Zeus and Demeter, unfortunately for Persephone the other god felt like they had a right to decide her fate. Her mother Demeter made the decision to enrol her daughter in helping her with Mysteries, but her father, Zeus however had other plans and he took it upon himself to give his daughter away. The person she was given too was obviously Hades. The bothers planned how they would take her, so when Hades came up from Underworld he took Persephone back with him. 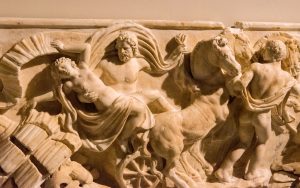 However even though Persephone was taken to the underworld against her own will, Hades made beautiful gardens for her to make her feel better about being him. He even treated her with a huge amount of respect treating her like a true goddess she was. This lead her to learn a completely different side to Hades that no one had ever saw before leading her to actually fall in love with him.

With the loss of her daughter and help, Demeter became saddened and refused to continue her duty to bringing life to the earth. Zeus quickly became concerned about the dying earth , as this point Zeus forced Persephone and Hades to part from each other, however before she left Hades offered his wife a leaving gift and that was pomegranate seeds that were grown in the underworld. 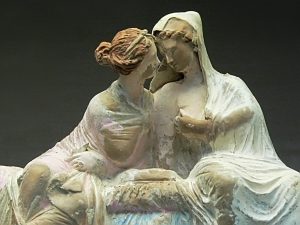 But these seed weren’t just any normal seeds, Persephone wasn’t stupid she was extremely clever of what was being presented to her. It meant whoever ate the food of the underworld will be bound to it and must return. This was something she was very willing to accept. So she ate 6 of these seeds so for 6 months she must stay in the underworld but the other 6 months she would spend with her mother soothing her grief. 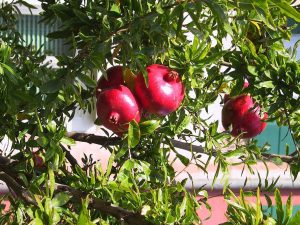 During the 6 month she was with her mother people say this is spring and summer as this is when the world is most fertile and plants will grow, but the moment she went back the underworld would slowly start to die again which is Autumn/fall and winter. This is how people in the Greek mythology believed the season were discovered.