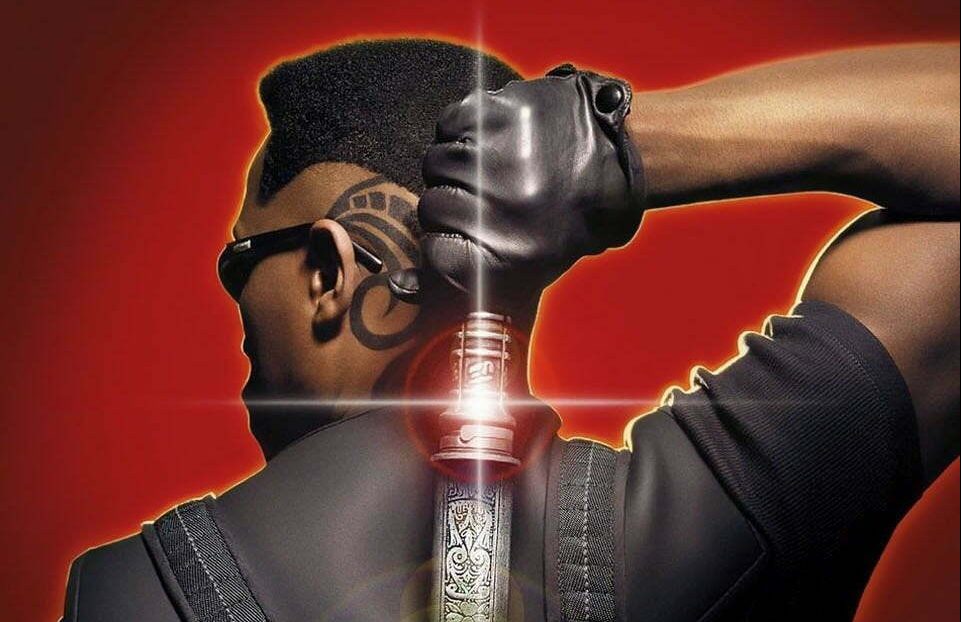 Blade is an action/ vampire movie that was released in 1998. It is based on the blade comics published by marvel, and it was directed by Stephen Norrington, with writing by David S. Goyer, music by Mark Isham and was produced by Robert Engelman, Peter Frankfurt and Wesley Snipes. Cast members of this movie include Wesley Snipes, Stephen Doff, Kris Kristofferson, N’Bushe Wright, Donal Logue and Arly Jover.

Warning this review will contain spoilers for those who have not seen this movie.

Our story begins with a woman who is viciously attacked by a vampire. She is rushed to the hospital, where she gives birth. Luckily the baby comes out unharmed, but the woman passes away due to her injuries. We then jump 30 years, where we find that the baby has grown up to be a vampire hunter known as Blade (a vampire himself who hunts other vampires and also, he can walk in the day). We see him in action when he cashes a vampire night club, (that includes its own blood sprinkler system. Very fancy). He kills all the vampire guards. He is then soon confronted by a vampire known as Quinn, and Blade manages to beat him by chopping his arm off and setting him on fire (nice). However, when the police come, they put the fire out and take Quinn’s body away, unaware that he is not as dead as he looks.

We then meet Karen Jenson, who works at the hospital, sadly, her life gets insane when she is bitten by Quinn and is turned. When Blade finds her, he decides not to kill her, instead, he takes her to his safe house, where he and his human ally Abraham Whistler tell her about the war they have been raging against the undead. Whistler treats Karen’s wound, but then he and Blade tell her she must leave the city at once.

Meanwhile, a meeting is being held by the elder vampire council (a fact for you, these vampires are pure blood which means they were born vampires and are seen as the most important vampires in the Blade saga). They are angry with the actions of Deacon Frost (who is the owner of that vampire nightclub) for trying to start a war between the vampires and humans and drawing the attention of Blade. On the other hand, Frost believes that vampires are superior to humans and that humans should be nothing but lambs to the slaughter.

Meanwhile, Karen returns to her apartment, where she is approached by a cop who turns out to be the human familiar to Frost. Before he could kill her, Blade comes in and subdues him however the officer manages to get away. Karen then tells Blade she is sticking with him so that she can find a cure for herself. Even though he tells her, there is no cure, neither the less he allows her to tag along. Meanwhile, the officer returns to Frost, but when he finds out he failed in his mission, Frost drinks so much blood from him that it kills him.

Blade and Karen then head to the vampire archive to find out what Frost is up to. There they come across an obese vampire called Peral, who is the record keeper. They both then start torturing Peral using a UV lamp until he says in vampire language, “La Magra is coming, the spirits of twelve will awaken the blood god”. Before they can learn anything else, they are attacked by Frost’s vampires, led by Quinn.

We would later find out that Frost plans to use the members of the pure blood vampires as sacrifices to revive the blood god, but he needs one more thing for the ritual to be complete. The blood of the day walker.

Frost soon manages to find Blade’s safe house, where he kidnappees Karen and mortally wounds Whistler, which he then asks Blade to kill before he turns. Blade then heads for Frost’s stronghold armed with a new weapon (a serum that Keren created that makes vampires go kaboom). However, Blade is shocked to find that his mother is still alive. Unfortunately, she is a vampire, as she turned when Blade was born. This leads to Blade being taken, hostage.

Now that he has everything, he heads to the temple, where Frost will revive La Magra. Blade is drained of his blood so that the ritual can be completed, which it is, and now Frost has the powers of the blood god. Fortunately, Karen comes to his rescue and allows him to drink her blood, which gives him the strength to kill all of Frost’s vampires, which also included his own mother (but he knew that this monster was no longer the woman who gave birth to him, due to all the evil acts she has committed).  He then confronts Frost, but he soon learns that it is not easy now he has a blood god inside him. However, he soon finds a way when he injects all his special serum into Frost, which causes him to swell uncontrollably and then blow up.

The movie ends with Karen and Blade going their separate ways, we then see Blade now in Russia hunting more vampires.

Thoughts and feelings about Blade

This was a great vampire Movie. An example of this is thanks to Wesley Snipes’s portrayal of Blade. This was because he did a great job working on his characterisation, which gave us an incredible and ruthless vampire hunter.

The scene with the vampire council was also interesting as it showed me that vampires had a peace agreement with humans for some time now. It also showed that not all vampires agree with this, such as Deacon Frost, who believes humans are nothing but food.

I also really liked the serum Blade used to make Vampire blow up. This was brilliant because, after all his crimes, it was satisfying to watch Frost inflate like a balloon and blow up (he wanted to be big, but I don’t think this was what he was talking about).

Blade and Whistler’s friendship was great as well. Because I could see a kinship between them, which is good to have when you’re at war with vampires, it was sad, though, when Blade had to kill his friend. However, it was what Whistler wanted better to die a human than him turning vampire and Blade having to kill him (thankfully, Whistler can now rest in peace with his killer all over the walls and on the floor).

Overall, I thought this was a really strong movie, and I can’t wait to see what Blade does next in his next movie.

View Profile | View all posts by ben4
5MSGaming has gone live on Twitch!
Sonic the Hedgehog 2020