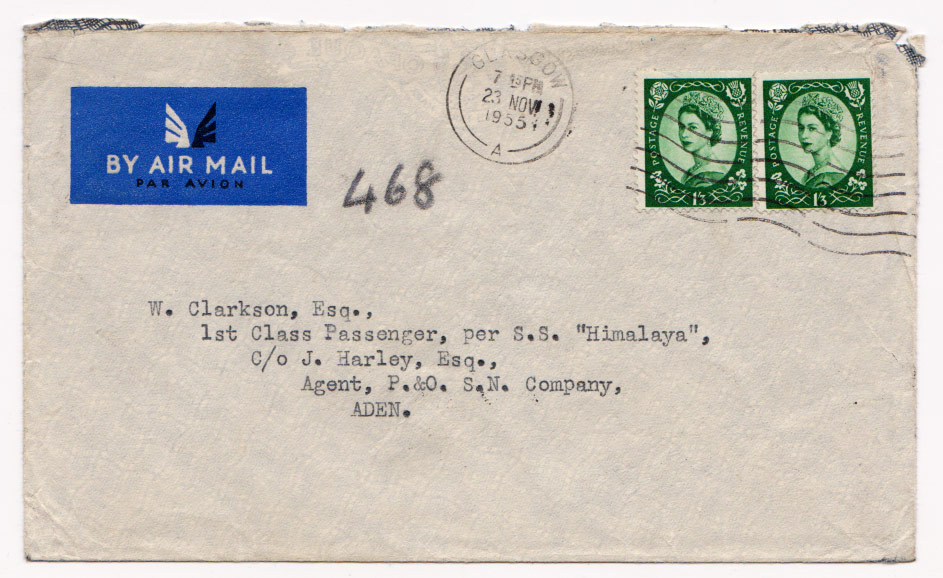 The cover we are about to discuss is unusual for a number of reasons and harks back to the days before mass air travel became common. Right up until the end of the 1950s a trip from the UK to Australia for most entailed a long cruise. Thus keeping in touch was done by sending a letter to a port on the journey.  Covers as such are fairly common but this one turned out a bit more unusual following a bit of research. This letter was posted airmail on the 23rd November 1955 from a Glasgow firm of Chartered Accountants. The recipient was likely either a business person or a wealthy client given they were travelling 1st class.

It is franked with two 1952 1/3d Green Tudor Wmk Wilding definitives.  We know the stamps are from this set as the later St Edward Crown Wmk version was not issued until March 1956.

It arrived in Aden (now Yemen) 5 days later as shown by the machine cancel on the reverse.

The destination – S.S Himalaya was part of the P&O passenger fleet at the time and its route was:

Thus the letter was picked up on the sixth stop on its journey and we have to assume that the passenger was carrying on otherwise why send it to a shipping agent. So it is almost certainly a piece of commercial mail, which brings us to the final interesting aspect of this cover.

The cover is the franking 2 Shillings & 6d which doesn’t correspond to any postal rate at that time. Between 1947 & 1952 this rate covered letters weighing between 2oz & 2½oz to Zone A destinations (which covered Aden). However, the rates were changed from 1st May 1952 to the following for Zone A:

Neither of these matches the franking but the rate for Zone B was 2 Shillings & 6d.  So we have to assume that either the sender was happy to give the post office an extra 3d tip or that they mixed the Zones up. Neither is a good look for a firm of Chartered Accountants!

Let’s hope whatever the story the contents were worth it.

We hope you enjoyed this article which we have used to highlight the research potential in what at first glance may have appeared a fairly mundane cover. It now has potential as an interesting display item in a GB collection or even an exhibition page.

While you are here why not check out our other postal history articles.