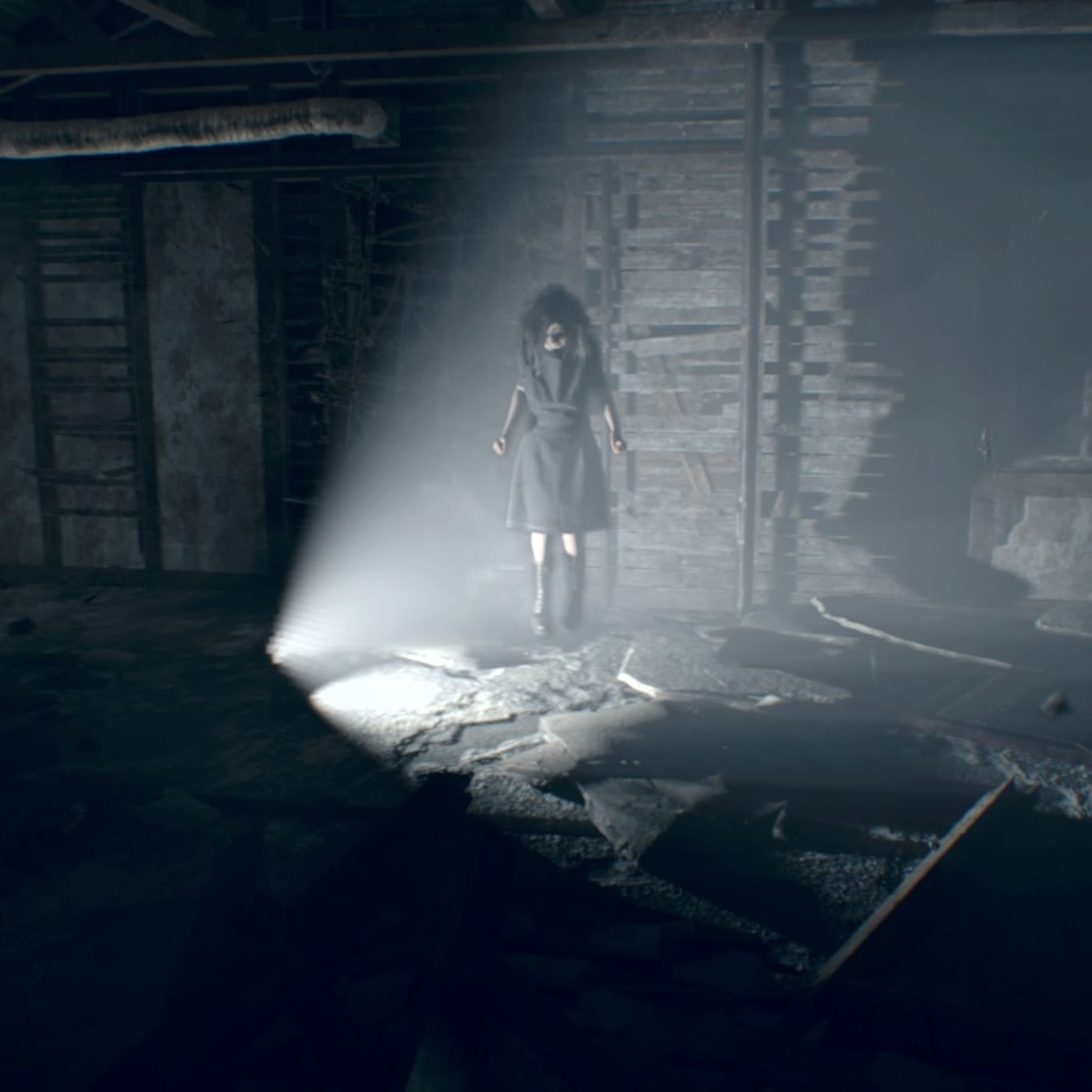 Eveline  codenamed E-001, was a genetically-modified human conceived as part of the next generation. To become a bioweapon researched conducted by The Connections, designed to eliminate enemies without the need for combat.

As a result of the merging of an anomalous bacteria into her genome during the embryonic stage. She gained the ability to control the minds of people who came in contact with her. Eveline was unique in being the first E-Type bioweapon, alongside her unhealthy obsession with creating a family to suit her own needs.

E-001, also known as Eveline, was developed by The Connections using a sample of mold supplied by Miranda, alongside a sample of DNA from Miranda’s daughter Eva. Born sometime in the early 2000s, Eveline was artificially aged to appear as a ten-year-old child to suit her purpose for infiltration.

Her birth proved to be controversial in the bio-weapons and weaponry market in general as her projected ability to end battles through mind control rendered the economically-devastating traditional bio-weapons as well as conventional weapons such as firearms, chemical weapons or even nuclear weapons obsolete. With groups such as Blue Umbrella determined to track down Eveline and her creators, the company made the decision in October 2014 to take her into hiding.

Agents Alan Droney and Mia Winters discreetly escorted Eveline under the guise of parental guardians onto the cargo ship Annabelle bound for Central America, where they planned to disembark and take her to a second laboratory. 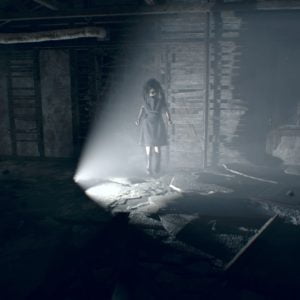 On October 5, the ship was caught in the midst of a violent hurricane. This caused Eveline to become unstable and rebel against her handlers. Infecting Alan and then running away further into the ship where she began vomiting excessive amounts of Mold and infecting the ship’s crew, all the while being pursued by Mia.

At this time, Eveline began referring to Mia as her “Mommy” and made clear her wishes and intentions to have her own family. Also demonstrating her powers against those she despised when she accelerated Alan’s infection and killed him in retaliation for his referring to her as a “little bitch”. Eveline was able to infect Mia with the Mold as well in the hopes of keeping her alive and under her control. The two were soon thrown into the Gulf of Mexico as the tanker was torn apart by the storm.

Eveline and Mia would both wash up alongside the wreckage of the tanker in the bayou of Dulvey, Louisiana in the following days.On October 10 they were both rescued by Jack Baker. Who took them back to his family’s ranch. With Mia unconscious, they had no way of knowing how dangerous Eveline truly was, and instead provided the two with shelter until the storm subsided.

Jack placed Eveline in Lucas’ old bedroom, with Zoe intending to clean her and provide her with new clothing – however, Eveline soon caused a blackout in the main house and ran off, where she ended up infecting the Bakers one by one, turning them into her new “family”. It took about two weeks to keep the Bakers fully under her control though, with them lapsing back to their normal states with a deep suspicion of Eveline, but unable to remember why.

Over the next three years, Eveline began ordering Jack, Marguerite, and Lucas Baker to abduct homeless people and tourists in the hopes of adding them to her adopted family. Although Lucas would soon become immune to her mind control after using a serum provided by The Connections, he nonetheless kept up the pretense and was able to fool her into thinking he was still under her control.

Jack and Marguerite, meanwhile, remained under her control for the rest of their lives and had them kill most of the abducted when they were deemed unfit to be part of her family. Eveline’s obsession with family drove the Bakers to abduct more and more people in 2016, attracting national attention.

It accelerated in the latter half of the year as her body began to wither from the effects of rapid aging at twenty-five times the typical human rate due to her not receiving her medication. By early 2017, Eveline had the appearance of an eighty-year-old woman and was placed in a wheelchair to preserve her mobility. The Bakers nonetheless continued their abductions in accordance with Eveline’s wishes.

The arrival of Ethan Winters

In July 2017, Eveline manipulated Mia into contacting her husband Ethan in the hopes that he could be turned into another father figure for her. When he subsequently arrived and freed Mia, intent on escaping the Bakers’ guest house with her, Eveline ordered her to kill Ethan in response to his inadvertent attempt to break up the family, but he was able to successfully fight back and defeat his infected wife before being knocked out by Jack and taken to the main house alongside Mia.

Sometime between their capture and Ethan’s awakening, Mia escaped the grasp of the Bakers and headed towards the Old House under threat of capture by Marguerite, and upon entering the Old House Mia saw a vision of Eveline watching over her chase and calling to her.

Eveline was first truly seen by Ethan when he woke up at the dinner table next to her alongside the rest of the Baker family. However, once the family had disbanded and left her alone at the table, leaving Ethan to make his escape, she suddenly disappeared without a trace, presumably using her powers of hallucination. From her wheelchair, she followed Ethan around the property, occasionally appearing along Ethan’s path and causing hallucinations such as the sound of childish giggling and a vision of her young self when he recovered the arm of a D-Type bio-weapon, all the while using the Mold against him.

Once Ethan and Mia defeated the Baker family with the help of Zoe and successfully made it off of the Baker property, Eveline calcified Zoe in retaliation and used the Mold to prevent their progress when they came across the rusted wreckage of the tanker, managing to kidnap Ethan and seal him in the depths of the ship. As Mia began the search for her husband, Eveline grew increasingly frustrated at Mia’s amnesia which led her to help Mia regain her memories by reliving the experiences of October 5 shortly before the tanker was destroyed.

Once Mia had fully regained her memory, she despised Eveline and adamantly stated that she would never be her family, leading Eveline to discard her feelings and become fully hostile towards her. When Mia finally found Ethan, she pleaded for no harm to come to him as Eveline insisted that he did not love her, but that she could make him love her. Mia freed Ethan from the Mold and handed him a vial containing tissue samples from Eveline, shutting him off from her before being reclaimed by the infection.

Motivated by the apparent loss of his wife, Ethan determinately fought his way through Eveline’s Molded in the nearby mines and reached the lab of the Connections where he crafted the E-Necrotoxin required to kill her, experiencing increasingly intense hallucinations as she focused all her power on controlling him. Upon Ethan’s arrival back at the Guest House through a secret passageway in the basement, Eveline fought back using visions of an infected Mia to ward him off and an almost telekinetic ability to try and push him away, but Ethan was able to reach Eveline in the attic of the guest house.

Once she was injected with the E-Necrotoxin, Eveline’s ability to control Ethan’s mind ended and he could only see her aged form, causing her to cry and lament that everyone “hated” her before suffering and screaming about how much the toxin hurts. Her body then broke down and merged with the Mold around the house, turning her into a large Mold-based creature towering over Ethan. Their fight was short-lived, however, thanks to a Blue Umbrella helicopter dropping an Albert-01 loaded with RAMRODs for Ethan to use, and after suffering serious damage, Eveline finally calcified and her body crumbled into pieces.

Despite Eveline’s death, the Mold still continued to grow around Dulvey, prompting Blue Umbrella and the BSAA to quarantine the surrounding area. Three years later, Eveline appeared to Ethan Winters as a hallucination after his heart was ripped out by Miranda, claiming that he was already dead.

Ethan at first believed that she was referring to his wounds, but Eveline corrected him, claiming that he had been dead long before his encounter with Miranda. Eveline revealed to him that he died after his initial encounter with Jack Baker. When Ethan demanded an explanation as to what he is, Eveline answered that his whole body was “nothing but mold”. Eveline mockingly told Ethan that he would never be able to see his family again, and disappeared as Ethan awoke in The Duke’s carriage.