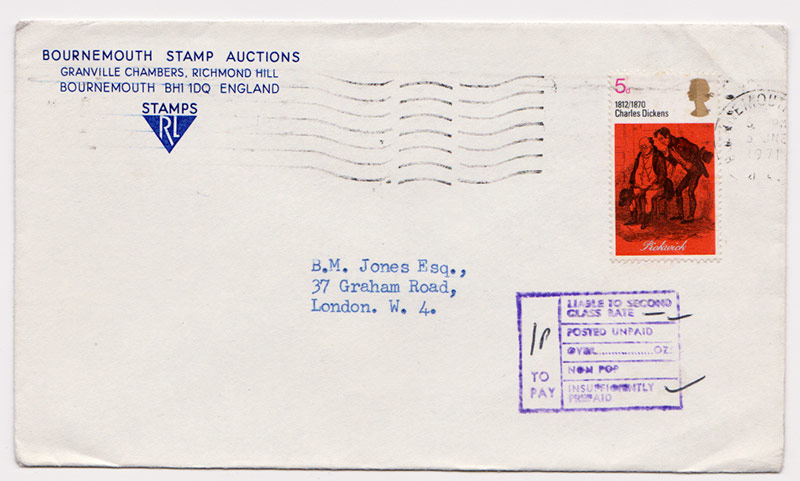 Despite Great Britain moving to decimal currency on the 15th February 1971, pre-decimal stamps (from George V Onwards) remained postally valid. This validity ended on the 29th of February 1972 and in the interim caused no end of confusion. This resulted in a plethora of underpaid mail and is an interesting and currently inexpensive collecting area.

The cover below is a good example of the confusion… The cover has a purple explanation box, but no postage due stamp or other markings. Here the level of confusion is exemplified as it indicates that the cover is liable to the Second Class Rate. However, this rate at the time was 2 1/2p.

The 5d stamp covered 2p of this so it is likely the extra 1/2p was added as a penalty. Alternatively, the postal worker seeing it was franked with the traditional 1st class rate decided to up-rate it accordingly.

There are no markings on the reverse so we will never know if the extra penny was paid or not. Whatever it has added a bit of interest to an otherwise nondescript cove which would most probably have been discarded otherwise.

While you are here why not check out our other postal history articles. The GB Postal Museum has an interesting article regarding the switch to decimal which you can read here.