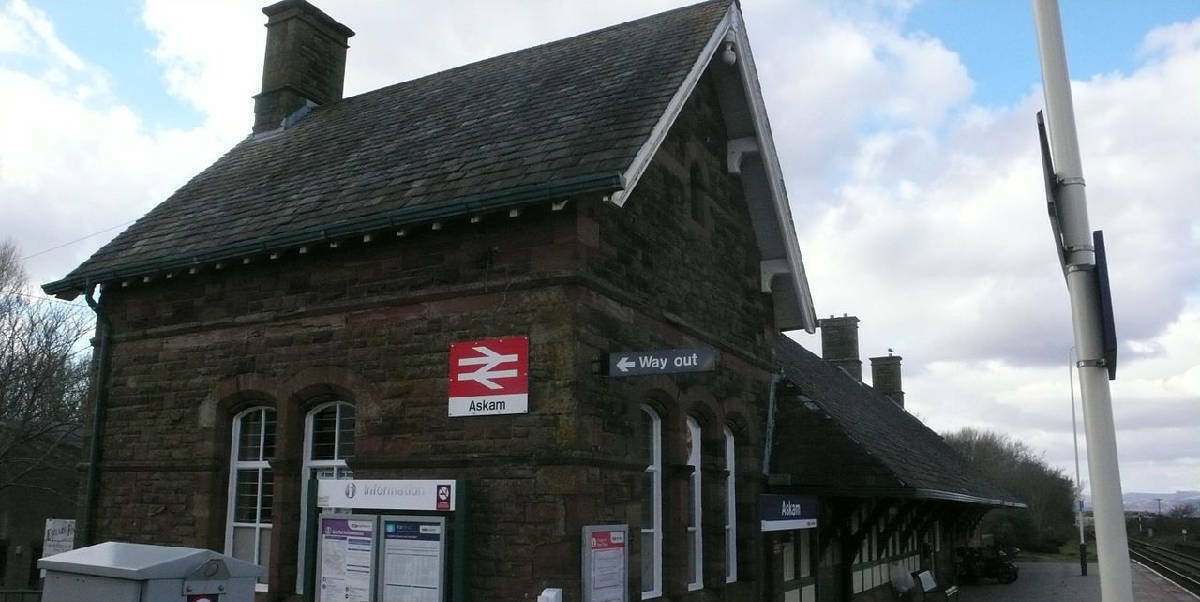 Askam in Furness is one of Cumbria’s many hidden gems and well worth taking the trouble to explore if visiting the county. Although the place itself is fairly modern, Ireleth which now forms part of its postal town pre-dates the Doomsday Book so there is a bit of history to the town. It is one of the stops on the scenic Cumbria Coast Railway for those looking to explore the county by train and the location is idyllic being on the Southern shore of the Duddon Estuary.

If that’s not enough for you to want to visit then how about the panoramic views of the Lake District fells including Black Combe. To the west, it also has great views across the Irish Sea. Basically, whichever way you look your eyes are in for a treat!

A Brief History Of Askam & Ireleth

Ireleth is the older and smaller of the two villages, being able to trace its origins back to the Viking days. Originally it was probably a small collection of huts along the nearby stream and its name is thought to be derived from the original Norse invader “Ire” who most likely set up his home on the sloping hill “Leth” in the old Norse.

It was also mentioned in the Domesday Book (1086), although historians do still quibble as to whether modern Irleth is what was referred to. Whatever the area likely remained largely rural throughout the Middle Ages, and was under the control of the Cistercian monks from Furness Abbey from the mid 12th Century. They would have held sway until Henry VIII ordered the English  Reformation in 1537.

By 1608 the village had a school thanks to a donation by Giles Brownrigg. The school still exists at the time of writing as St. Peter’s.

The Birth of Askam

The rise of Askam can be traced back to the discovery of significant iron ore (Hematite) deposits in 1850. This has been credited to Iron Dealer Henry Schneider who arrived in the area in 1839, and this would lead to the opening of the Burlington mine in 1851. Although not known at the time this would turn out to be Englands second-largest iron ore deposit, and over 7 million tonnes would be extracted. This put Askam firmly on the map and soon blast furnaces were built in the town which increased its stature.

The local Railway station was opened in 1851 as Ireleth Gate Station and in 1875 it was changed to Askam Station. It was mainly introduced to transport the ore, but soon became pretty busy passenger wise thanks to the influx of miners. The station buildings were added in 1877

Several important buildings were constructed during this period, including the Grade II listed St Peter’s Church in 1865

Although many of the miners were here for the short term a fair number came with their families, and soon rows of terraced houses sprang up to house them. By 1896 mining employed well over 500 men and most of the ore mined locally was smelted here.

The ore was finite though and by 1918 it had pretty much run out. Smelting continued for a while but by 1933 most of the smelting plants had been demolished, leaving the slag heaps as the main reminder of its short-lived mining heritage. Today what was originally two villages form one conglomerate with Askam in Furness now being the postal town. With a parish population of 3,462 at the 2011 census, it probably falls into the small town category. However, amenities are limited and as discussed below there is not a whole lot of in village accommodation for the tourist.

Askam has its’ own lifeboat station, Duddon Inshore Rescue

Askam United are the local team and in 2020-21 they were members of the West Lancashire Football League Division One. This is tier 12 on the Football League pyramid. They play at the HBP Ground which is pretty much standing only but there is a bar nearby. If you are a supporter of amateur football try and get down for a game. You can keep updated with their fixtures etc via their Twitter account.

The shoreline carries the highest possible wildlife and countryside conservation protection and is a fantastic amenity for walking, fishing and golf.

Walking, cycling and sightseeing are the big outdoor attractions here, however, there is plenty of fishing opportunities available and even game shooting (in season).

If fishing is your thing then you can salmon fish on the River Nith, or try your hand at one of the many Lochs which mainly offer Rainbow Trout, however, some also contain wild Brown Trout are also stocked with Carp & Tench. Of course, you are on the coast too so bring the beach caster and try your luck. Black Sea Bream are quite common as are Pouting and flatfish such as Dabs. When the weather is colder Cod also move closer to shore too.

If this is your thing Game shooting (in season) is available at Drumlanrig Castle which offers Pheasant, Partridge & Grouse.

The drinking fountain is worth checking out for that all-important selfie. It was installed in 1897 to commemorate Queen Victoria’s Diamond Jubilee. The inscription reads “Keep the pavement dry” which is somewhat cryptic to us. Now a Grade II listed building that remains as a reminder of the towns once-proud Iron Works tradition. The West Coast Line runs through here and the line offers plenty of exploration opportunities too. Established in 1845, Furness Brick is an independent family-run manufacturer that still makes its bricks in the traditional manner. We doubt they will do tours but you could always pop down see or view the impressive tower from a distance.

So now we have enlightened you regarding the town’s charms we are sure you can’t wait to pay it a visit.  Well, fear not getting there is easier than you would think.

The A595 runs through the town. This is the main road serving the southwest Cumbrian coast so once you are on it you can’t miss the town. Much of it is single-carriageway currently, so drive carefully.

Askam is the second last stop or (second depending on where you set off from) on the Cumbrian Coast Line. This is a great line to travel on if you are not in a hurry as there is some great scenery on the route.

If you are travelling from outside the mainland UK (or from the Southeast of England) the nearest airport would be Liverpool.

We could only find one bus route serving the town and that only runs on a Wednesday! The Blueworks X7 service connects the town with nearby Ulverstone & Barrow. You can check the timetable on the Cumbria County Council website.

There is not a whole lot of choice if you want to stay overnight, however, there are holiday cottages available and also some listings on Airbnb. Hotels & Guest Houses seem to be conspicuous by their absence. Fortunately, there is plenty of options in nearby Barrow, Dalton & Millom. Check out our directory for options.

Thinking of Moving To Askam

Askam in Furness as you have read is a lovely place to visit but it is also a nice place to live. It has reasonable road and rail links, and of course, the surrounding locale is lovely.

Anyway, a quick look at a couple of estate agencies indicated that in early 2021 two-bed terraced houses could be picked up for below £100k.

This compares favourably with the 2020 average for terraced houses for nearby Barrow and the rest of Cumbria. Anyway, you can check out the data here.

There are a few properties to rent and as of late 2021 prices varied from around £600 PCM for a decent size terrace house up to £1000+ for detached properties. Like most places availability varies so it is best to check with a local estate agent.

So there we have it, our overview of the attractive Cumbrian village of Dacre. where the houses are still affordable and the scenery is to die for. Before you go why not check out our business directory for the town? And, if you are not already a member, why not register and join us at Five Minutes Spare?

And, if you’re a big fan of Cumbria why look at some of our other ‘Five Minute Location Guides’ for the county? Or, maybe you’d like to have a go at our Big Fat Cumbrian Quiz?