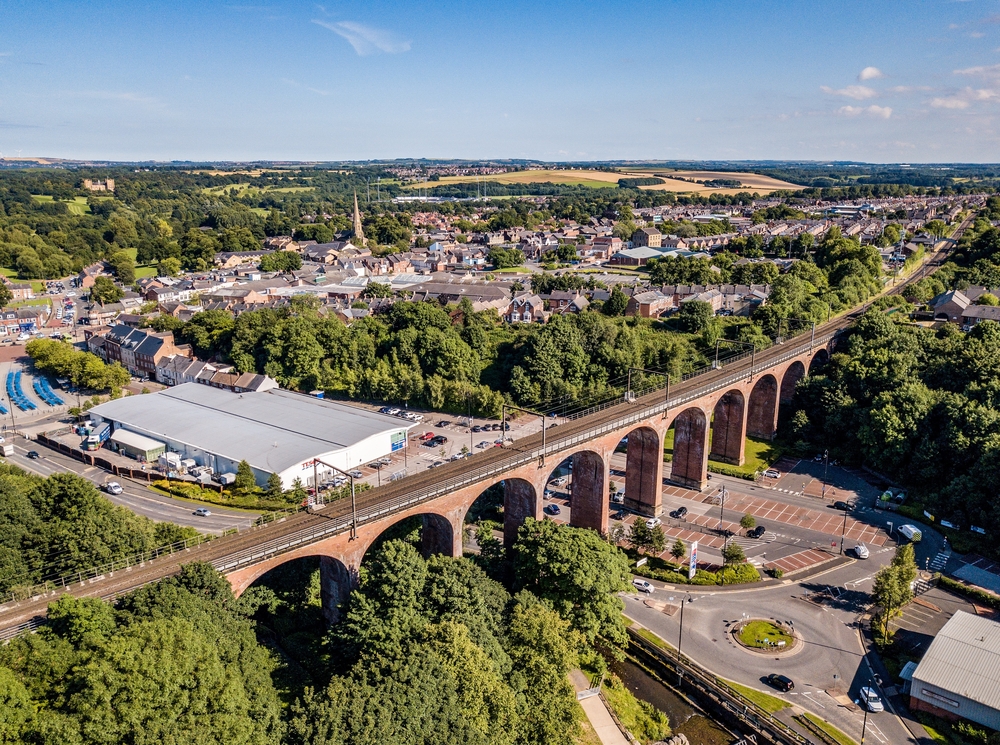 Chester Le Street is a market town located in County Durham in the north-east of England. Its history dates back to Roman times when they built a fort there. The name Chester derives from the Latin word for fort; ‘castra’. The ‘street’ part of the town’s name refers to the paved Roman road that ran north-south through the town (now called Front Street), but it’s thought that the designation was only added to distinguish it from all other Chester’s.

The history of Chester le Street starts with the Roman fort of ‘Concangis’, which was built around AD 122. Naturally, the fort was situated adjacent to the Roman Cade’s Road (now Front Street) and close to the River Wear. Ships were able to navigate the Wear to reach the fort with valuable supplies to support the Roman occupation. Given its strategic significance, it remained in operation right up to the time Romans left Britain in AD 410.

Between AD 950 and 960, the Lindisfarne Gospels were translated into Old English by the resident monks. By AD 995, the Viking campaign of raids on the North East coast that had begun two centuries early was now becoming much more frequent and severe. The local monks decided to move St Cuthbert’s body to the relatively safe haven of Durham. Soon a new cathedral was built there, which then became the regional capital and the seat for the area’s principal Bishop.

In 1054, Chester le Street’s wooden church was rebuilt in stone and despite the loss of its bishopric, retained a certain degree of regional influence. In 1080, much of the town was razed to the ground and many of its population butchered by the Norman military. This was in revenge for the killing of William Walcher, the first prince-bishop, who had been butchered by a group of local dissidents. Following that recent spate of devastation, and the fact that the region was firmly under the control of the Bishop of Durham, the compilers of the Doomsday Book decided to give Chester-Le-Street a miss.

In the 13th century, Chester le Street’s parish church was built on the site of the town’s original church, dedicated to the memories of St Mary and St Cuthbert by adopting their names. The church’s 156 ft (50 m) high distinctive spire was added in 1409, with the Lumley Warrior statues being a 16th-century addition during the reign of Elizabeth I.

As the years past, the old Roman highway, Cade’s Road, was gradually overlain and eventually superseded by the Great North Road, the main route between London and Newcastle/Edinburgh. Chester-le-Street’s strategic location on the road played a significant role in its development, not only spawning the town’s name but by becoming at a favoured stop-off place for stagecoach workers and travellers, alike. A great number of inns, shops and services sprang up in the town to cater for the passing trade.

By the early 18th century, Chester-le-Street was at the heart of the developing coalfields in the North East. In 1793, local businessman, William Murray, started an engineering company in the town. By 1826, his two sons were running the business, expanding quickly to meet the growing market for machines, pumps, locomotives and standing engines to assist with the growth of the local coal industry. Soon, Murray’s notable engines were being distributed to all parts of the country and exported abroad.

In Slater’s Directory for 1876-7 an advert read; “Thomas Murray Steam Engine Builders, Cast Iron and Brass Founders, Makers of Blowing Engines, Heavy Pumps and Manufacturers of every Description of Castings for Colliery purposes“.

In 1867, the railway came to Chester le Street, with an impressive eleven arch viaduct being built to cater for the new development. The impressive feat of civil engineering has dominated the town’s landscape ever since. The once-thriving stagecoach industry which had brought jobs and prosperity to the town went into an immediate and rapid decline, ending abruptly. A short time after, one of the town’s great commercial success stories of the industrial revelation also suffered a similar demise. In 1874, the last known engine built by Murray’s was produced for New Herrington Colliery.

In 1878, Thomas H. Murray, the last family member to oversee the business, died suddenly. The closure of the Murray works soon followed but it was not until 1890 that the company assets were finally sold. The once world-renown Murray’s Engineering Works quickly began to fade in memory of Chester-le-Street’s townsfolk. The former site of the old engineering works was used for a variety of purposes over the following years, but in 1985 it was totally cleared, to make way for a car park. In 1894, Chester-le-Street Rural District was formed, taking in the town itself and several outlying villages.

In 1909, a new authority was formed, the Chester-le-Street Urban District Council, separating out urban from rural areas. The new district boundaries stretched as far as the town’s expanding municipality.

In the early 1900s, Gateshead and District Tramways sought Parliament’s permission to extend their tram operation to Chester-le-Street. Parliament denied the application, so the company decided to set up a motor bus operation instead. In 1913, the Northern General Transport Company was launched, which had its first depot at Picktree Lane, Chester-le-Street. The first motor bus service in the north-east ran from Chester-le-Street, via Birtley, to Low Fell. The service was quickly extended to Gateshead and within a few years crossed the River Tyne to finish in Newcastle.

In the 1950s, Chester-le-Street’s town centre was by-passed. ‘Front Street’ which had been so important in the town’s history, forming part of the A1, the main arterial road from London to Edinburgh, was re-designated as the A167. In the 1970s, the A167 was partly re-routed to form a bypass road itself and partly incorporated into the new A1(M) motorway.

In 1995, the influential Riverside Cricket Ground opened in Chester-le-Street. The ground is home to Durham County Cricket Club but also hosts occasional international matches, helping to promote the town on a worldwide basis. The ground now forms part of the Chester-le-Street Riverside Leisure Complex, which has gone from strength to strength over the years, being home to a great variety of sports and leisure activities.

In 2009, Chester-le-Street District Council was abolished when County Durham became a unitary authority as part of another major reorganisation of local government in England.

St Mary and St Cuthbert’s Church was the cathedral church and shrine of St Cuthbert from AD 883 to 995, during which time the resident monks translated the Lindisfarne Gospels into Anglo-Saxon. There is a facsimile of the documents on display at the site. Anker’s House is a small museum attached to the church with displays dating Roman, Saxon and medieval times. The house was once home to 6 anchorites, an extreme form of hermit practice, between  1383 to circa 1538. A model of the Anchorites’ living quarters is also exhibited. The impressive brick-built viaduct is situated just to the northwest of the town centre, dominating the skyline. It was opened in 1868, for the North Eastern Railway Co., bringing the train to Chester-le-Street. It now carries the East Coast Main Line, the main railway from Newcastle to London.

Lumley Castle was built in 1388. It sits upon the eastern bank of the River Wear and overlooks the town and The Riverside Park. Today the castle is a 73-bedroomed hotel, which many believe is haunted. In 2019, the castle teamed up with Escape Rooms Durham to offer a live Escape Game housed inside the castle’s old beer cellar. It tells the story of Lily of Lumley, who was supposedly thrown down a well in the castle grounds by two priests for rejecting the Catholic faith. Her ghost is said to float up from the well and haunt the castle.

Things to do in Chester le Street

If you’re a cricket fan then you might be in luck on your visit to Chester le Street. The Riverside Ground is a first-class county cricket ground and home to County Durham Cricket Club. The ground occasionally hosts international fixtures, mostly involving the England cricket team.  The cricket usually runs end of March to the end of September and features first-class (3 to 4 days), 1-day and 20/20 competitions.

Riverside Park has served Chester le Street as an entertainment venue since the 1930s. Children of all ages can enjoy some 5,000 sq. m of play area. There’s also a splash pad. The pleasant riverside walk also includes a stretch of ornamental gardens. The park is open every day of the year and has free admission. There’s also a kiosk which sells light refreshments.

Getting To Chester le Street

If you’re travelling by car, then the easiest way to get to Chester-Le-Street from London and the south is via the A1(M), and from Edinburgh and the east side of Scotland, via the A1/A1(M). A more scenic alternative for the 30 miles of your journey, if you travelling north, is to take the A167 from Darlington, which passes through Newton Aycliffe and close to Durham. If your travelling from the West, then the A69/A1/A1(M) is the fastest route but there are more picturesque routes off the A69.

Chester-le-Street railway station lies on the East Coast Main Line of the National Rail network, between Newcastle and Durham. It offers local connections and cross-country train services. The train operators serving the station are CrossCountry, TransPennine Express and Northern Rail. The station is staffed on a part-time basis by Northern Rail.

There are two operators that provide bus services in and around Chester le Street and to Newcastle and other nearby towns; Arriva North East and Go North East, the latter operating from the town’s original Picktree Lane bus depot. Buses leave Newcastle’s Haymarket Bus Station approximately every hour minutes for Chester le Street with an expected journey time of just over an hour. Long-distance bus services to and from Chester-le-Street linking with London and the rest of the country is operated by National Express.

Newcastle International Airport is located on the outskirts of Newcastle at Ponteland, approximately 18 miles (29 km) from Chester-le-Street via the A1(M)/A1/A696.  The expected journey time to/from Chester le Street to Newcastle Airport via car or taxi is approximately 30 minutes. There are numerous short-haul and long-haul flights to multiple destinations throughout Europe, Asia and the Americas from Newcastle Airport.

A broad indication of prices for the most readily available types of accommodation in Chester-le-Street, based on 2 people sharing, are:

Now you have read all about Chester-le-Street you should be able to Ace our quiz. give it a go!